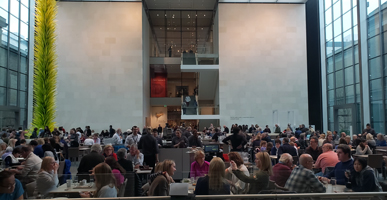 I’m going off script — my apologies for not writing about today’s Advent readings. Because I want to share with you something that is on my heart. Something I hope fills your heart this Advent. I want to share with you a song. More particularly a performance of O Holy Night. I know – it is hardly an underplayed song. In fact, it may be one of your favorite Christmas hymns, as it is mine. It has been performed beautifully by countless choirs, including our own Canterbury Choir. And taken to iconic heights by Celine Dione and Josh Groban. But you may not have heard the version I’d like to share with you. It was performed in 2013 as a “flash mob” in the café courtyard of Boston’s Museum of Fine Arts — by a Berklee College of Music student group called Loft Sessions. It is six and a half minutes long, but I hope you can take the time to watch the video. I know it is a lot to ask on a busy Saturday morning a week before Christmas. Believe me, I get it. But if you are able to watch, I think you will be as moved as I was when you hear it. If not, I hope my reflections below still speak to you.

Here is the link to the video: https://youtu.be/fGJAm1iM1Vc

So, were you moved? The music and the voices are transcendent. But there is more to it than that to me. I love the setting. Museum-goers taking a break from the exhibits and enjoying lunch in a beautiful light-filled space. A special day, no doubt, but an “ordinary” one. Then the extended vibrations of a cello break into the ordinary, heralding something extraordinary. And wholly unexpected. Was it not like that for the shepherds tending their flock on that Holy night – the very one that this hymn recounts? When a multitude of angels suddenly broke into the ordinary with something absolutely amazing? With good news that the very God of the Universe had come to earth that night to bring hope and fulfillment to our pining hearts? For all time? And our souls felt their worth. Flash mobs may have become the rage about 8 years ago, but there has never been a flash mob quite like the heavenly one in those fields outside Bethlehem that night.

There is another part of this performance that tore me out of my ordinary. About half way through the song (3:24 in the video), comes the bridge where the chorus sings “Fall down on your knees. Fall down on your knees.” They added the word “down” to the original “fall on your knees”. This adaptation and the soaring composition of the bridge brought me right beside those shepherds, who in those fields that night, fell on their knees before such an overpowering spectacle. The spectacle of a multitude of heavenly host praising God. In the voice of Linus reciting the King James version of this story: “they were sore afraid”. They were in such all-encompassing awe that they fell to their knees. This was no taking of a knee in protest. This was no forced gesture of obedience to an earthly ruler. They FELL to their knees. In the presence of such glory, it was visceral.

I did not see anyone fall to their knees during the performance 8 years ago in the MFA. But I did notice that they stopped eating their meals. There was no clinking of dinnerware. The ordinary stopped, and something beautiful broke in. Then, just as swiftly, the performance ended. The captivating spell broke.  Conversation resumed, dishware clinked, eating resumed. The ordinary returned. But I daresay that hearts were changed. Mine was, and I only experienced it on YouTube. Imagine what it must have been like to be there.

This Christmas, I hope that you are able to find a moment that breaks into your ordinary. A moment where you allow yourself to grasp the enormity of what God has done for us. With such clarity that you too cannot but help fall on your knees in awe and wonder. Something truly amazing happened on that night those many years ago in Bethlehem. Since then, the ordinary has returned. But I daresay that hearts have been changed. I know mine has been, and I have only experienced it through its recounting and the whisperings of the Holy Spirit. Imagine what it must have been like to be there.