Living into “The Present House of God” 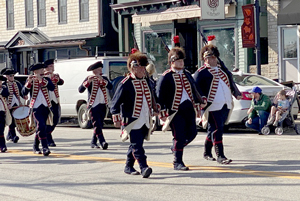 Psalm 122: Song of Praise and Prayer for Jerusalem;
Isaiah 2:1-5: The Future House of God;
Matthew 8:5-13: Jesus Heals a Centurion’s Servant

As I have done for over 20 years, I stepped out of my office on Main Street on November 11 to watch the Veteran’s Day parade. Older men dressed in colonial garb, teenagers in marching bands, tikes in their “Scout” uniforms make up some of the 30-minute spectacle in honor and memory of the brave men and women who have served this country in the armed forces. I have nothing but respect for them.

I enjoy the privilege of waking up day in and day out with a roof over my head, food on my table, and money to pay my bills, yet I still grapple with the fact that humans have for centuries been unable to reconcile “tribes” and “peace”, as mentioned in Psalm 122. Humans still die in the name of God, for one nation or another, to end a war to end all wars… I shake my head…

I suspect passages in the Bible can be interpreted as giving humankind license to kill others in the name of God, but I still hold onto the hope that someday, “they shall beat their swords into ploughshares, and their spears into pruning-hooks”, as Isaiah describes.

Can “tribes” become “TRIBE”?. Can we rediscover a universal Christ? One God for all, manifested in a walk in the dark, a sugar maple aglow in fall yellow… or extending the peace to someone I do not know…

May we turn The Future House of God into a present one.