The good things are ahead. 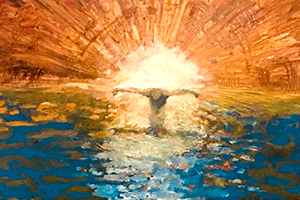 In a recent sermon Rev. Tanya mentioned that profound things often come from the children.  It reminded me of a question that was asked in an RSCM class a few years ago when I was teaching a class of 2nd and 3rd graders in the Linking Music and Liturgy class.

“If so many bad things happened, why do they call it Good Friday?”

It’s not the kind of thing that one expects from someone so young and who might think of Good Friday as a day off from school.  And I had to admit that I didn’t know where the name came from or when it was designated as such.  But I answered the best way I could, and that was to say that it was probably because so much good had followed.

Yes, many bad things happened. Jesus was arrested by the local court and accused of blasphemy. He was handed over to the Roman authorities, flogged and sentenced to crucifixion. Jesus was subject to verbal abuse being mocked by people in the crowd and challenged to come down from the cross if He is the Son of God.

And finally he commended His Spirit to God and died.

But the story doesn’t end there. The good things are ahead.

On the 3rd day an angel proclaims the fact that Jesus has risen from the dead! Jesus appears to His disciples and friends in several places and even on the road to Emmaus to two fellow travelers who recognize Him only when He blesses their evening meal. He has the ability to appear and disappear and does so several times.

Later, He is among a crowd and delivers marching orders to the Apostles. He gives them a Great Commission: to go about preaching the good news of salvation everywhere. The good news is that in His sacrifice he has secured the forgiveness of sins to all who will believe. Jesus ascended into Heaven. His followers watched Him rise until they could see Him no longer.  And the final good word is His promise to be with us to the end of time.

And that, I believe, is why it is Good Friday, a day to which we look ahead on this Wednesday of Holy Week.  And I hope that children continue to ask good questions. They give us something to think about and look into for ourselves.