“The Field of Blood” 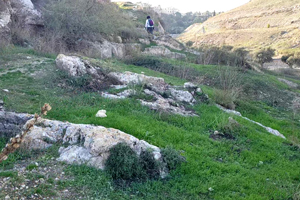 Acts 1: “… (Now this man acquired a field with the reward of his wickedness; and falling headlong, he burst open in the middle and all his bowels gushed out. This became known to all the residents of Jerusalem, so that the field was called in their language Hakeldama, that is, Field of Blood.)”

I need to begin by saying I am no Biblical scholar even though I have been an Episcopalian since my early baptism. I know many Biblical stories, have read many parts of the Old and New Testament and have been part of many Bible Studies over the years. But I am not a Biblical scholar.

So I was a little confused when I began to read the lessons for today. What jumped out at me from Acts was the “Field of Blood.” Truthfully, I’m not sure why. So I began to do some research to find out more about what happened to Judas and the “Field of Blood” which is known as Hakeldama, located in the Hinnom Valley, just south or outside of Jerusalem.

We are all aware of Judas’ betrayal of Jesus for just 30 pieces of silver. When the cursed Judas tried to return the money, to save Jesus, the chief priests and elders refused to accept it, telling Judas it was none of their concern. This is where there are discrepancies in the story, depending on which part of the Bible you read.

When rebuked, according to Matthew, Judas threw the money on the floor and went and hanged himself. Meanwhile the priests used this “blood money” to purchase the Potter’s Field, which was rich in clay – thus the name, for burial of non-Jews and foreigners who might die in Jerusalem.

However, Acts tells us that Judas retrieved the blood money and bought the land himself. Here he threw himself headfirst into a pit he had dug and in the process his body burst open, spilling his intestines, etc. into the pit. That land then forever became known as the “Field of Blood.” A small piece of history, that probably doesn’t have much significance to Biblical scholars at this point in time… or maybe it does. It is said that the Apostles hid in, what is now known as the “The Cave of the Apostles” in the Field of Blood during the Crucifixion. Scared, fearful and perhaps guilty.

This field was originally used to bury non-Jews. Not a place of high regard for people in Jerusalem and the surrounding countryside. What I found to be so interesting is something that had such negativity in Jesus’ story and that of the people of Jerusalem, changed so dramatically at another point in history. How many times do we see that happen throughout history?

During the 12th century, the Crusaders, with great honor, buried their dead in this cemetery still known as the “Field of Blood.” This became a holy place for the Crusaders and “loads of soil” were taken back to Europe to consecrate Christian burial grounds throughout Europe.

During the late 1970’s an archaeologist dig discovered tombs in the area where a monastery, built in 1874, once stood. They found two tiny, rolled silver cylinders that would have been worn around one’s neck. Inside the cylinders, written in ancient Hebrew, was a priestly benediction: “The Lord bless you and keep you.”

It brings to mind how an experience in history can be so negative and reviled at one point. Yet, at another point in history it can be cherished and honored. How does that happen? Times, people and cultures change.

No matter what history shows or tells us, we know as Christians that God is our constant…through our past, current and future life. God is always with us and within us. We know that will never change. God is the center of our universe, the heart of our being and the God who forgives and blesses us with grace.