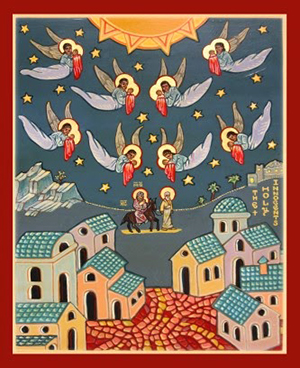 An angel of the Lord appeared to Joseph in an dream and said, “Get up, take the child and his mother, and flee to Egypt, and remain there until I tell you; for Herod is about to search for the child, to destroy him.” Matthew 2:13-18

We have spent the better part of the last month listening to angels. There was the angel that told Zechariah that his barren wife would conceive and bear a son in their old age. Then there was the angel who told Mary that God was favoring her by choosing her to give birth to God’s own son, Jesus. And of course, Matthew tells us of the angel telling Mary’s betrothed husband, Joseph, that Mary was to bear a holy child and call him Emmanuel which means God is with us. And near Bethlehem where Jesus was born, the angels appeared to the shepherds announcing his birth. Each time, the angel says: do not fear; this is of God and it is good!

But today’s encounter was very different. According to Matthew, this time the angel shared a fearful warning that to save Jesus’ life, Joseph and Mary must take the child to Egypt, to become immigrants in a country and culture unlike their own. King Herod, a king, it is said, who was so afraid of competition that he would strike down all male children under the age of two to make sure Jesus did not survive.

Can you imagine it? Parents so worried about the safety of their child that they would leave their country with only the few clothes and little food they could carry and go to live among strangers? Can you imagine their fear as they traveled through unknown land not knowing what they would find as they entered a new country? But to safeguard their child’s life, they would take that risk leaving everything they knew behind.

We know them. They come to our southern border fleeing dangers we cannot imagine in their home countries. Each year parents like Mary and Joseph risk everything to safeguard their children who are in danger from gangs, drug dealers and human traffickers unchecked by overwhelmed or indifferent government officials who cannot stop the constant crime. These parents are willing to give up everything to save their children just like Mary and Joseph did.  And how are they received at our borders? Are they welcomed as they seek asylum and our mercy? We know the answer to that question and we know the work we need to do to offer them welcome in the name of the Holy Child we claim as our own.

May we make it so.