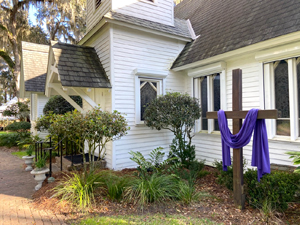 When I read these scriptures about justice, what came immediately to mind was our study in Adult Formation of Chapter 1 of Seven Last Words, by James Martin, SJ, entitled “Jesus Understands the Challenge of Forgiveness.” The chapter is about Luke 23:26-37, when Jesus said on the Cross, “Father, forgive them; for they do not know what they are doing.” One of the examples in that chapter was of a woman lawyer who was able to forgive the murderer of her sister, her husband and their unborn child – and I realized that we were very familiar with it, so discussing this chapter was up close and personal. We knew the place the murder occurred (and later lived in that condo), knew her parents quite well, had met the woman and her sister, and actually knew the murderer when he was younger. He had previously tried to poison his family, had stolen our family motor scooter and had been caught, so when the murder occurred when he was age 17 there was a real question of whether he was a criminal who couldn’t be redeemed. He was convicted and sentenced to life imprisonment without the possibility of parole. I also knew that the issues of punishment, justice, mercy, redemption and forgiveness were complex – but I had no idea how difficult it is to understand forgiveness, even as a Christian. I then read the woman’s book, Change of Heart, by Jeanne Bishop, written some 15 years after the murder occurred, and was astonished that the author had been able to forgive her sister’s murderer, communicate that forgiveness to him, and receive a letter from him with the first acknowledgment of his guilt and an apology for the murder – from a murderer who had never before confessed or expressed remorse. But still the family, all of them practicing Christians, was split on the issues of the death penalty and victims’ rights. So I wanted to share my thoughts in this blog, so please forgive the length!

There are powerful ideas in these readings, evidence of God’s restorative justice, and – I believe – central to our understanding of Jesus’ words on the cross. But I found that they also elicited more questions than answers, evidence that our concept of human justice is different than God’s. Consider this quotation from John 8 when Jesus was asked if a woman caught in adultery should be stoned: “When they kept on questioning him, he straightened up and said to them, ‘Let anyone among you who is without sin be the first to throw a stone at her.’”  If we are to judge another of a sin, we are entitled only if we have not sinned. Must we have “clean hands” in order to judge others? And this later on in the same chapter: “You judge by human standards; I judge no one. Yet even if I do judge, my judgment is valid; for it is not I alone who judge, but I and the Father who sent me.”  Thus, Jesus calls us to judge by God’s standards. What are they, in the context of forgiveness and mercy? Are there conditions that Jesus applied to the process of forgiveness, or are they merely examples? Is forgiveness only for our own benefit, to avoid living a life of hate and revenge? Or is forgiveness only if the sinner repents?  Can we impose justice on the sinner and still treat him as a human capable of redemption?

As I considered these questions, I concluded that humans can achieve true forgiveness only by God’s grace. Or as Fr. Martin expressed it, “moments of radical forgiveness.” To tie forgiveness to conditions imposed by humans is to not believe the true meaning of Jesus’ words. We are called upon not only to forgive but to reconcile with those who harm us. Mtr. Tanya commented that this is a “radical view” of forgiveness, and I guess that’s right – but isn’t it required from a Christian if we really believe what Jesus said on the Cross? When I took this picture of the cross this Lenten season in front of our church in Georgia, I told myself that it is.