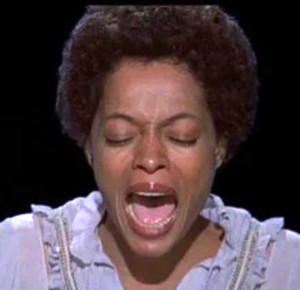 I first read the selections of readings for Saturday, the Fifth Week of Lent, a couple of weeks back. While procrastinating the actual writing of this reflection, two thoughts continued to pop-up for me. The first thought, because I have a tendency to think in song/musical numbers, centered on the song. “Home” from the musical, The Wiz. The second thought that plagued me, and continues to, is, who was Caiaphas?

So, “let’s start at the very beginning”…again, there I go thinking in musicals (hear Julie Andrews in your mind).

In Ezekiel 37:21-28, the Lord says, “I will take them from the nations among which they have gone, and will gather them from every quarter, and bring them to their own land.” These lines made me think of Diana Ross lamenting her old home and envisioning the return to her home of “love and affection.”

Later in Ezekiel, God says, “my dwelling place will be with them.” In these readings, we hear of Israel and a desire to return to the homeland; and yet, home is within/with God. We can return home, or visit home for the first time when we realize that no outer journey, no airplane or train or donkey of old will take us there. Diana Ross sings of living in a “brand new world” and that it’s a fantasy. The fantasy world is just that, as our real home is within, by God’s side.

My thoughts turn from Diana Ross and onto Caiaphas…I want to know who this man was, what were his thoughts and intentions. Admittedly, I can sometimes be a bit of a Pollyanna. I want to believe that most people are good and kind. Perhaps it is my Pollyanna tendencies causing me to view Caiaphas through a kind eye.

Caiaphas, the Jewish high priest who turned Jesus over to the Romans for sentencing did so to engage in the least harm to his people. Caiaphas had “prophesied that Jesus was about to die for the nation, and not for the nation only, but to gather the dispersed children of God.” I see Caiaphas as a messenger and deliverer of God’s plan. I understand him not as a man who had hatred for Christians, for the followers of Jesus, or for Jesus himself, but rather, Caiaphas was a man who wanted to protect his Jewish brothers and sisters from death and destruction at the hands of the Romans. Caiaphas foresaw that his act of turning Jesus over would protect the home of Israel, the home within.

Perhaps Caiaphas also had a premonition of Ross’ “Home.” Maybe Caiaphas in his attempt to protect his people/God’s people sought to “convince time to slow up” by offering Jesus to satisfy a Roman thirst for power that would have compromised the masses.

Caiaphas’ decision to put forth Jesus as a sacrifice for the greater good, in accordance with his premonition that Jesus “was about to die for the nation, and not for the nation only, but to gather into one the dispersed children of God” was therefore in accordance with God’s plan for a land and a people where, as Ezekiel describes, there would be “one king” who is “king over them all.”

A place where there is one king, one people, one love…this is home.

In closing, God spoke of and Caiaphas allowed for all of God’s children to:

Look inside our hearts, to find
A world full of love
Like yours and mine
Like home.